By JOHN BLACK, Founder of ADS

The Eden-Monaro by-election will be held on July 4. With a week to go, Labor’s Kristy McBain is the bookies’ favourite on $1.70 to win, with published robo-polls giving her 53 percent of the two-party preferred (2PP) vote.

Despite trailing in the robo-polls and with Sportsbet paying $2.25, I think the Liberal candidate Fiona Kotvojs is pretty good value for money if you like a flutter. There are a few reasons for this, but first some background.

Eden-Monaro is pretty close to being Australia’s version of Magic Town, named after the 1947 movie featuring a fictitious version of one of the original United States polling companies. The pollster – played by James Stewart – is obsessed with finding a small town which is a perfect demographic and political sample of the USA. This meant it could be milked cheaply for perfect poll results on everything from toothpaste preferences to voting intention.

Mike Kelly first won the seat for Labor when Labor’s Kevin Rudd won the 2007 election. He won it again in 2010 when Labor also held Government, and he lost it in 2013, when Labor lost Government. So far, so good for Eden-Monaro’s reputation as Australia’s political Magic Town.

But then the popular Dr Kelly stood again for Eden-Monaro in 2016 and won, despite Labor losing the national election narrowly to the Coalition. He eroded the Eden-Monaro’s Magic Town reputation further in 2019, by holding the seat on 50.9 percent 2PP vote, despite Labor’s failure to regain Government.

When we look into the demographics of Eden-Monaro, we see it’s very similar to Australia, in terms of its socio-economic indicators which cover job status, education status and income. It also contains some urban overspill from Canberra, some farming and fishing communities and a slice of tree-changing and sea changing retirement communities. 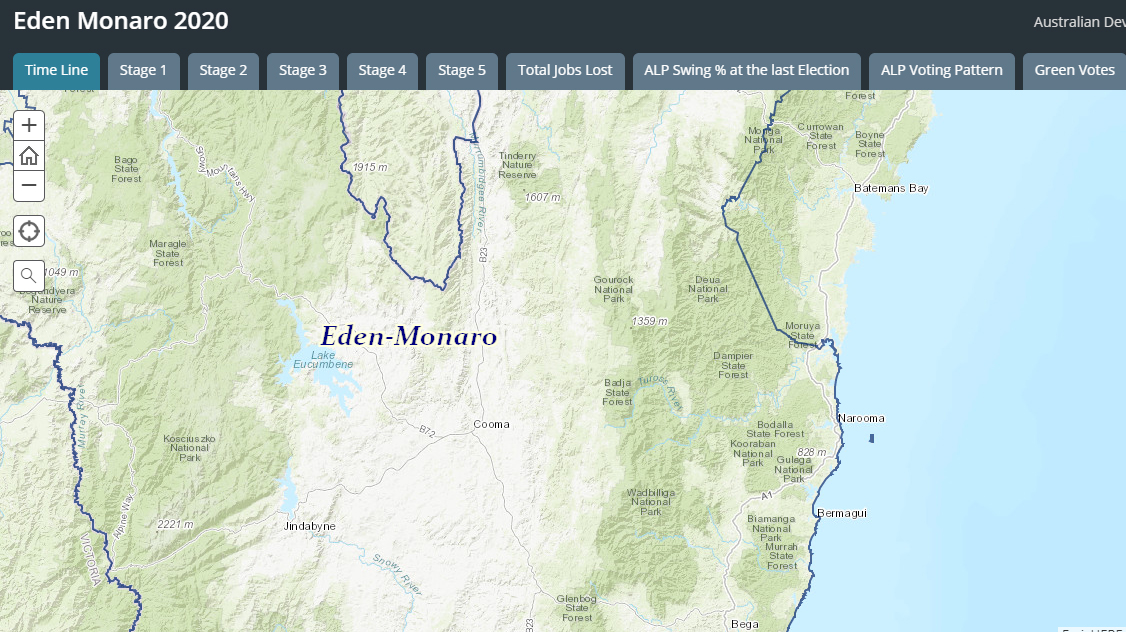 The differences between Eden-Monaro and Australia seem minor but explain why the seat went against the trends in 2016 and 2019, sticking to Mike Kelly as a well-regarded political identity.

Compared to Australia the seat, on average contains more farmers and farm workers and a disproportionate number of retirees. Our demographic profiling of elections back to 1966, shows farm workers and retirees have a weak class vote and are more inclined to cast a large personal vote for any effective MP seen to be doing a good job.

We did several national demographic models of the 2019 election and on the one we chose, Mike Kelly polled 6.6 percent more than the model predicted.

With a standard error of estimate of 4.5 percent, this was a strong performance and history tells us that when a popular sitting member like this retires, their personal vote tends to be redistributed back to the opposing party, especially when that party is nominating the same candidate.

In the case of Eden-Monaro, that party is the Liberal Party and their candidate is again, Fiona Kotvojs. It’s important to bear in mind we model 2PP votes, so one candidate’s overperformance, is also their opponent’s underperformance.

So, it’s statistically safe to say Kotvojs would have won Eden-Monaro in 2019 with up to 55 percent of the 2PP vote against a less effective sitting MP than Mike Kelly. Hence my tip earlier on the value for money bet.

Anthony Albanese is now the Labor Leader, not Bill Shorten. Both men were on similar levels of satisfaction – 41 percent – at similar stages of the election process, but Shorten was on a dissatisfaction score of 49 percent before the last election, compared to Albanese’s 38 percent.

Scott Morrison performed below par during and after the bushfires which devastated the east coast of the electorate over Christmas and this region was just getting back on its feet when it got whacked again with job losses from the Covid lockdown.

Labor now appears to be running an effective postal vote campaign in 2020 compared to 2019, when it ran no campaign at all. This is a sleeper for Labor.

The National Party and the Shooters are reportedly up to some preference allocation tricks in Eden-Monaro to disadvantage the Liberals. Even if true, I suspect these factors can be disregarded. Voters have more important things to worry about at the moment.

Scott Morrison has performed above par during and after the Covid-Pandemic and lifted his personal pre-2019 election satisfaction score from 46 percent to 66 percent and his Better PM rating from 47 percent against Bill Shorten to 56 percent against Anthony Albanese. Tick one for the Liberals. But this is a pretty big tick, especially in a crisis such as we’re now facing, when voters tend to rally behind the Government of the day.

The big group relatively unimpacted by the Covid jobs Lockdown is of course public servants, and Eden-Monaro contains a lot of these, due to some fast-growing, high-SES, urban overspill south of Queanbeyan and this included some swings to the Coalition in 2019. I suspect this is a sleeper for the Coalition.

But other pre-election Robo-polls overestimated Labor’s 2019 vote by three percent at the last election by oversampling IT-savvy, highly-paid professionals and younger highly-mobile, agnostic, Tertiary students, with strong dependence on social media, who love to fill in online media surveys and polls. These were the groups swinging to Labor in 2019. These are the groups now most impacted by the Covid Lockdowns.

The robo-polls in 2019 also under-sampled working families with two reasonably secure jobs, a mortgage to pay off and dependent school aged kids to look after, and they also under-sampled church goers, especially those on the fringes of our major cities. These are the groups which swung to Scott Morrison and the Coalition and they are the group least impacted by the current Covid Lockdowns.

The big unknown here are how the public votes during the Covid pandemic and associated jobs lockdown and none of us will know this for sure until we get the results on Saturday night.

But on the evidence, Fiona Kotvojs is good value at $2.25 for a win. Very good value.

We can tell from the online interactive map that the areas hit hardest in Eden-Monaro by the jobs’ lockdown in March/April, were those showing the strongest signs of recovery in May. You can track the impact of the changes by clicking on the stages from 1 to 5.

We also include map layers showing swings and votes at the 2019 election. The votes provided are based on modelling of all the votes cast in Eden-Monaro, not just the booth votes which are becoming increasingly irrelevant, due to major increases in pre-poll voting.

What do you want to find?

Impact on Australian Employment by COVID-19

Mapping the impact of Covid downturn

Impact on Australian Employment by COVID-19

Mapping the impact of Covid downturn